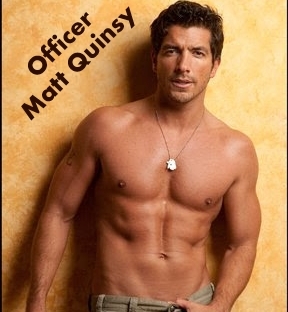 Can I tell you, it is awesome?! 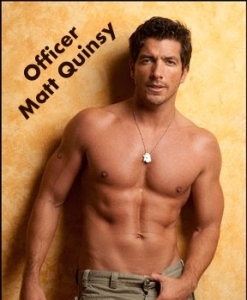 Trust me, I’m a professional writer, so I know. You’ll laugh, you’ll cry, you’ll stay up way past your bedtime to finish reading about the romantic adventures of Matt and Lindsay.

There’s still a few rough patches I have to fix. And then I need to find a publisher who will want to print it… but then you’ll see what I mean.

Lindsay, a graduate student at Roselle University is pulled over for speeding by a handsome NY state trooper. Turns out he went to Roselle too and he lets her go with a warning. A month goes by and who does Lindsay see at Roselle’s homecoming tailgate? Officer Matt Quincy. Best of all, he drove down to Delaware, just hoping to see her. Despite living four hours apart, they decide to see if they can make it work. Busy schedules and the spector of an old flame threaten to pull them apart, but the magic of love–and a little pixie dust–lead them to a happily ever after.

He reached for me and I took a step back, shaking my head. “I changed my mind.” Thinking I was kidding, he went for my arm again. I dodged away.

Realizing I was serious, he raised his hands in surprised surrender. “What do you mean?”

His hands still raised in the air, he lowered his eyes. “What?” I followed along with him and we both stopped when our gaze reached the growing bulge in his pants. “Is there something wrong?”

“Uhhh, yes,” I squeaked, dragging my eyes upward. Then I glanced down at my ridiculously paltry mosquito bites. “Your chest is bigger than mine.”

He chuckled. “Aww, stop,” then flexed his pecs, the big jerk. “I spent a ton of time at the gym this month. I’ve had a lot of nervous energy, thanks to you.”

“Even so, you are absolutely gorgeous. You can’t want to be with me.”

His mouth dropped open. “What are you talking about?”

I swept my hands down in front of me. “Look at me. I’m built like a twelve-year-old boy.”

He reared back a little, to give me a good, long look. Then tipping his head to one side, he said with complete sincerity, “I think you’re beautiful, Pix.”

It took all I had not to snort. I stared longingly at his pecs covered in a light dusting of hair, his obliques bracketing impossibly defined abs, the happy trail just below his navel, disappearing in the waistband of his sweats. Hell, even his belly button was sexy.

Then my gaze returned to his eyes. They were hungry. Craving.

He tugged me into his arms, holding me flush against his obviously appreciative body. “Seriously.”

And then a little humor:

“Let me just pack it all up into a cooler bag for you.” Matt’s mother reached into the cupboard.

And as soon as her back was turned, I wiggled my butt at Matt. He growled and gave me a quick swat.

“Here you go.” She waved a brightly-colored insulated bag at us before tucking the food and utensils into the compartments. “I know it’s not a long trip, but this way you’ll have something to eat when you get there. Mattie’s always hungry and this will tide you over ‘til you get to the grocery store.” She winked at me. “We don’t want him to be cranky, do we?”

Mattie? That was hysterical. I would never have thought my giant, imposing boyfriend would have a nickname like Mattie. Or that his mom would talk about him like a three-year-old. I loved it!

Apparently, Mattie did not. He strode forward and grabbed the bag off the island. “I’m standing right here, mom. And I don’t get cranky.”

Which was funny, because he certainly sounded cranky. I glanced at his mom and she sent me a knowing look. But she reached up to pat his face. “I’m sorry, dear, you’re right. That was mean. I just want to make sure you both have a nice trip.”

If it sounds intriguing, let me know and maybe I can post a few more sections. Until then, it’s back to editing… now what’s another word for ‘love button”? 😉